Asa Nelson (Young Charlie Abner) declared at the age of 4, “I wanna play the fiddle, Mama.”  A year later he began lessons and soon entered the JAM (Junior Appalachian Musicians) program in Boone N.C.  He hasn’t slowed down since.  With God given talent, he plays by ear and has had the great fortune of learning knee to knee from some of the best old time fiddlers in the country.  He also flatfoot dances, plays clawhammer banjo and guitar, but fiddle remains his choice instrument.  Asa has been the recipient of the Wayne C. Henderson scholarship, the Houston Caldwell Scholarship, the Charlotte Folk Society Scholarship to the Swannanoa Gathering. He received the Houston Caldwell Best All Around Youth award in Fries, Virginia. He has won numerous blue ribbons at fiddlers conventions in NC, Tenn and Virginia, and most recently took first place in youth old time fiddle at the Galax Old Time Fiddlers’ Convention.  He has begun to assistant teach in the JAM program and also shares his gift in nursing homes and to school children.  He lives on the family farm in Zionville, NC with his parents. Besides fiddling, he enjoys fishing, snow skiing, cooking, his church youth group activities, and mountain biking.

Elizabeth LaPrelle (Oza Abner) grew up in Rural Retreat, Virginia in a home where there was always singing, and a community with many fine old-time musicians. She has developed her repertoire from neighbors like Jim Lloyd, under the tutelage of powerful female ballad singers Ginny Hawker and Sheila Kay Adams, and from a wealth of field recordings of legendary singers from the mountains.  She was recently signed with Smithsonian Folkways Recordings with her duo Anna and Elizabeth; they tour internationally and their groundbreaking third album, Anna and Elizabeth, has been lauded by reviewers around the world. Elizabeth has performed at festivals and concerts all over the country; toured on the East and West coasts as part of the National Council for the Traditional Arts (NCTA) Music from the Crooked Road project; won prizes at countless Fiddler’s Conventions. She was a guest on Garrison Kiellor’s A Prairie Home Companion in 2005. Elizabeth has been a guest speaker and performer for college classes, and taught workshops at Centrum Voice Works in Port Townsend, WA, and the Augusta Heritage Center in Elkins, WV. She has travelled to the Republic of Georgia to study the traditional music of the Caucasus Mountains.(Excerpt from Fiddle Magazine). 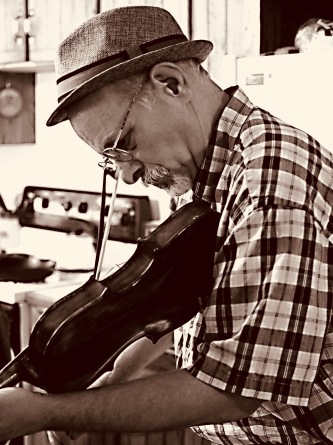 Dan Gellert (Charlie Abner) is a legend in the field of old time American music. As a result of the folk music revival of the 1960s and records he heard growing up in New Jersey, he began to master the banjo, guitar, and fiddle, and sing. At an early age he discovered the importance of taking the time to understand the music in a complete and detailed way, as if it were a language. Dan has given a lot of thought to what it takes to make the music sound and feel like the field recordings and old 78 rpm records he has listened to. While Dan is playing, one gets the sense he has entered another world which combines all his influences, yet it is his playfulness and improvisational sensibilities which make his style powerful and instantly recognizable. Dan’s fiddling is bluesy and rhythmic and without regard for modern standards of pitch and tone. In other words, he follows his muse, which makes his music stand alone in a world of timid imitators. Not for the faint of heart, Dan Gellert is a commanding and uncompromising talent.

Trevor McKenzie (Ves and Scorer) is a multi-instrumentalist and singer originally from southwest Virginia. The progeny of cattle farmers, he first gravitated to old-time music through an early interest in regional history and a keen desire to avoid doing manual labor. Though only mildly successful in the latter ambition, he gathered a respect for the communities, historical events, and stories which continue to build the canon of traditional music. Encouraged initially by family and church music, his formal musical trainibiolng began at Jim Lloyd’s Barbershop in Rural Retreat, Virginia. In recent years he has continued to learn from and be humbled by skilled musicians from along the Appalachians and around the world. Trevor currently lives in western North Carolina where he performs as a sideman with several regional acts including the Elkville String Band and the Laurel Creek String Band. On weekdays, he puts his historical knowledge and dusting skills to work in the archives of the W. L. Eury Appalachian Collection at Appalachian State University.

Ma Crow (Ruth Abner) is a longtime veteran of folk and bluegrass music.  She won the Cincinnati Enquirer’s CAMMY Award in 1999 and has recorded with various artists including Harold Kennedy, Roger Yeardly, the Flock, and Plow on Boy.  She was a featured guest with the Cincinnati Women’s Choir “MUSE”, a member of the Irish Ramblers, Mid-Life Crisis Ramblers, M.C. Blue, Chicken Deluxe, Friends of the Family, and Katie Laur’s All-Girl Bluegrass band. She played for many years with the well known Cincinnati band Ma Crow and the Flock and also formed her own bands, Ma Crow and the Medicine Show and also the Motherpluckers (nominees for a Cincinnati Entertainment Award). Performances include the Ohio State Fair, Tall Stacks, the Appalachian Festival, the Wool Festival, Queen City Balladeers summer concerts, Taste of Cincinnati, Richwood Bluegrass Festival, and live radio shows at WNKU in Northern KY; WYSO in Yellow Springs, OH; WPFB in Middletown, OH; WAIF in Cincinnati, OH; and WFPK in Louisville, KY. 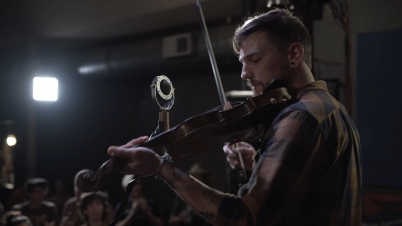 Mike Oberst (Willie Abner) is an accomplished multi-instrumentalist, musician, and songwriter best known as a co-founder of the Cincinnati, Ohio string band, The Tillers. Mike was born and raised in the Sayler Park neighborhood of Cincinnati, a stone’s throw from the historic US Route 50 as it winds down the banks of the Ohio River. Mike plays and tours, both solo and with his Folk/American band The Tillers whose music is also featured in The Mountain Minor. The Tillers’ rise to prominence in the local and regional folk scene was a rapid one, bolstered by a stroke of good fortune in the summer of 2009, when The Tillers’ recording of Mike’s song “There is a Road (Route 50)” was featured on veteran NBC news anchor Tom Brokaw’s USA Network television documentary on the history and significance of US Route 50. The Tillers have maintained a relentless touring and performing schedule, have released numerous albums, and have shared the stage with luminaries and heroes such as Doc Watson, Ramblin’ Jack Elliott, Iris DeMent, Jerry Douglas and many more. Mike also has a solo album Mike Oberst and His Five-String Banjo. In 2016 he produced and co-recorded an album of original music by North Carolina songwriter Jean Dowell.  He is currently in the early stages of recording and compiling the music of legendary Kentucky fiddler Tommy Taylor. Mike is also interested in American folk art, history, and methods of sustainable city living. He enjoys gardening, farming, and raising chickens at his home.

Hazel Pasley (Young Ruthie) was born and raised in the mountains of North Carolina and began playing guitar in the third grade, starting with her father’s instruction and then entering Alleghany JAM, a local after-school traditional music program. She also clogs and plays clawhammer banjo. Music and dance have been a part of a rich childhood for Hazel filled with fiddlers conventions, square dances, jams, and a wonderful community of musicians. All the members of her immediate family play music in a family band and much of her extended family and friends play as well.  She’s been known to form unusual bands with her friends, such as the Vegetarian Fisherman with Mullets, Bare Feet, and Coon Skin Hats, to compete at conventions and get a good laugh out of the emcee announcing their band name. As often as not, she’s fallen asleep to a fiddle tune ringing out somewhere in the house. She also loves soccer, running, American Ninja Warrior, acting, being out in the wilderness, and standing up for equality and humanity. Her mother and her traveled several days on a Greyhound bus to support the Standing Rock tribe in protecting their water. This summer, she co-authored and directed a play, The Missing Masterpiece, in local summer theater group.  She is endlessly thrilled to be a part of the Mountain Minor.